Home > blogs > GLIMER: Europe and refugees- Lessons for the next decade

GLIMER: Europe and refugees- Lessons for the next decade

Although the refugee crisis spans a continent, the best policy responses are made locally. In the second half of the last decade, Europe faced an unprecedented refugee crisis. Even if that immediate pressure has passed, climate change, poverty and political instability may present similar crises in the future. Institutions, such as the United Nations, argue that governments cannot send refugees back to countries suffering from severe climate risk. This poses serious questions for Europe. Yet, before this can be explored, it’s worth asking if states are the best vehicles for generating refugee policy? GLIMER, a pan-European research project on refugee integration and governance, offer some valuable insights. This is an interview with Professor Nasar Meer from the University of Edinburgh, GLIMER’s project coordinator, who discusses the project’s key findings.

Nasar explains that the primary goal of the project was to examine how cities and localities respond to refugees. In particular, it aimed to see if cities are doing things differently to national governments and if cities are better at creating sustainable refugee policies. Although the project was about cities and localities, the project needed an international dimension as the refugee crisis transcended national borders. So, the entry locations of Cosenza in Italy and Nicosia in Cyprus were studied alongside the final settlement destinations of Glasgow in Scotland and Malmo in Sweden. The ultimate goal was to find generalisable facts and patterns which could inform future policy.

Yet, the researchers also discovered that without critical knowledge networks, analysis would not be possible. In order to find these networks, GLIMER carefully identified key actors in each city (NGOs, local government actors and charities) who could give them a picture of refugee policy outcomes at a city level. Once they created these city networks, they brought them together on an international level at their Stake Holder Summits. These summits created opportunities for refugee service providers to compare what they were doing with each other, and it allowed GLIMER to properly co-produce its policy recommendations. 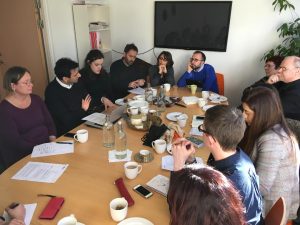 Nasar confirms that their work has indeed shown that cities are better equipped to create refugee policy in place of states. Nasar attributes this to how stories are told within cities: specifically, the stories of service providers. He elaborates that cities tell more coherent policy stories than those produced at the national level. He says:

He provides an example of this ground up narrative approach: the Scottish refugee incorporation strategy, New Scots, was altered when policy makers listened to refugee service providers in Glasgow. In this case, service providers were able to tell a clear story about how asylum seekers fell out of the system. They saw that the distinction between an asylum seeker and a refugee were creating serious problems. Unlike those who were classed as refugees, asylum seekers had no recourse to public funds. This distinction quickly led some of them to become homeless, potentially trafficked, and perhaps even a part of the clandestine labour market.

This clear narrative extracted from service providers working at a city level demonstrated how the original policy was self-defeating. Nasar is careful to add nuance and highlights that he doesn’t believe national governments are careless, it’s simply that they operate at a scale where they can’t immediately see these issues. Whereas when refugee policy goes wrong at a city level, local actors (particularly charities) see this immediately and have the intelligence and capacity to step in. Nasar sums this point up by stating the New Scots policy revisions were successful because city level insights were reverse engineered to a national level.

Refugees should be seen as assets not liabilities

Another reason why cities could be best placed to tackle refugee policy is the possibility for them to see the positive side. Nasar tells me that although Cosenza was on the frontlines of the refugee crisis, they pursued a radical integration strategy: Cosenza was a city suffering from long term depopulation. So, when Cosenza’s mayor and a few other local mayors in the Calabria region got together, they understood that the refugees presented an opportunity to reverse the depopulation problem. So, they created rapid integration strategies, putting the refugees into towns and areas which were suffering from heavy population loss. This policy had a great effect: within the decade local economies, which had been in terminal decline, were resuscitated. In one of these towns an elderly woman told Nasar, “I thought I’d never hear the sound of young children here again.” 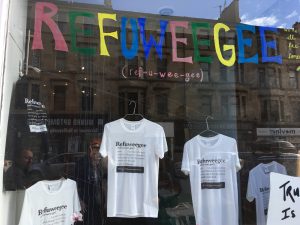 Moving on to the big picture, Nasar talks about how working on refugee policy internationally isn’t just beneficial for states. Nasar argues when working together, cities can see the true breath of the problem and the need for a common perspective. He clarifies this by noting, “To look at it from a Glaswegian or even U.K. picture will give you a very distorted view of what’s going on.” He follows this up by explaining that this distortion can be minimised if policy is examined from as many sides as possible. Nasar thinks this lead to one of best innovations of the project: the ability for cities to learn good practises from each other.

GLIMER also found that cities all have some important commonalities, the increasing importance of non-state actors in refugee policy being one of them. Nasar ascribes this to combination of states receding from refugee service provision and non-state actors proving their effectiveness at fulfilling these roles. He gives the example of language provision in Cosenza: even though language is critical to labour market access, state actors were not able to provide the necessary language provision. So, NGO’s had to step in and provide these services. Nasar notes that this isn’t unique to Italy and that Sweden, Cyprus and Scotland face similar situations.

Nasar finishes the interview by reflecting on the future. The project has created a number of really interesting policy proposals. When asked what the project has ultimately taught us about refugee policy, Nasar contends its that the state does not want to get involved in the complexities and intricacies of service provision. He considers if the city is inherently a more durable policy making structure. He opines, “many cities, as you may know, long predate nation states and will probably live long after nation states, perhaps, lose their influence in the world.”