Welcome to a joint webinar organised by JPI Urban Europe in collaboration with the European Network of Research and Innovation Centres and Hubs (ENRICH) in Latin America and the Caribbean (LAC). In this event, participants from Europe and Latin America will gain knowledge and understanding of the Food-Water-Energy (FWE) Nexus, its characteristics, as well as its tool for how to address the city solutions in innovative ways with concrete examples. 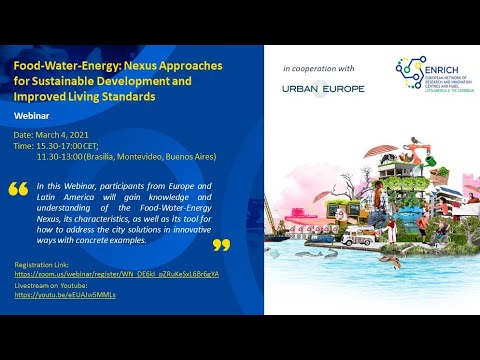 This webinar is one of a series organized by ENRICH in LAC and JPI Urban Europe on sustainable urbanization. The objective of this workshop series is to facilitate an exchange of knowledge and experiences between some Latin American countries and Europe. The webinar will build upon previously organized events in the series on Positive Energy Districts, organized within the ANPEI 2020 Conference and Urban Living Labs. This event targets programme managers at funding agencies, city administrators, local public officers, city planners and developers, researchers working on urbanization related areas, civil society, companies, and other stakeholders interested in co-creation processes.

“The interactions between food, water and energy sectors, both now and over the next few decades, are of critical interest to policy-makers, scientists, and society at large. By 2050, the world population is projected to increase to around 9 billion, with the number of people living in urban areas expected to double. These trends in population density and movement, coupled with land use change and climate variability, will lead to major increases in demand for resources and hold important implications for security and social justice. The reciprocal and dynamic processes of urbanisation, including the physical movements of populations, the build-up of city territories, transformation of economic structures, extension of suburban sprawl, and re-urbanisation, will result in increasing regional stress on the urban food-water-energy (FWE) system.

To date, we have a limited understanding of the FWE system’s complexity, resilience and thresholds. Investigations of this complex system will produce discoveries that cannot emerge from research on food or water or energy systems alone. An urban FWE nexus approach focuses on intersections and potential synergies between sectors and fields commonly seen apart in business, policy, and research. Thus, the FWE nexus approach can play a pivotal role in fostering sustainable urbanisation, by proposing potential solutions to govern resource interdependencies through comprehensive spatial perspectives and multi-level governance strategies.”
(from Midterm Valorization Event: SUGI – Sustainable Urbanisation Global Initiative Food-Water-Energy Nexus)

WASTE FEW ULL will map and substantially reduce waste in the food-energy-water nexus in cities across three continents: Europe, Africa and South America. The aim of the WASTE FEW ULL project is to develop and test internationally applicable methods of identifying inefficiencies in a city-region’s food-energy-water nexus. We will undertake this through an international network of industry/civic society-led Urban Living Labs (ULL) in four urban regions – UK (Bristol), Netherlands (Rotterdam), South Africa (Western Cape) and Brazil (São Paulo). Partners in Norway and the USA will provide economic valuations of potential impact, and impact-led public education, outreach and dissemination.

The Urban Living Labs (ULLs) of stakeholders are organised to:

The project will contribute with policy decision support models for economically viable waste reduction, rethinking waste as a resource as well as establish entrepreneurship networks in each ULL to continue working after the formal end of the project.

The Creating Interfaces project addresses capacity building for the urban food-water-energy (FWE) -nexus, making the FWE-linkages understandable to the stakeholders (city government, science, business and citizens), and facilitating cooperation and knowledge exchange among them. It will develop and test innovative approaches for local knowledge co-creation and participation through Urban Living Labs and Citizen Science approaches in three mid-size cities on water: Tulcea (Romania), Wilmington (USA) and Slupsk (Poland). Complemented by previous research and a citizen science toolbox, these labs comprise a user-defined co-creative approach, where research questions, problems, and solutions are decided and implemented with stakeholders themselves.
>> Watch the CREATING INTERFACES video: https://youtu.be/iAz9GGSWd0U