Home > blogs > BRIGHT FUTURE: Industrial towns can have bright futures if we find the right stories

BRIGHT FUTURE: Industrial towns can have bright futures if we find the right stories

One of the great stories of European history is the industrial revolution: a story of technological advancement and profound socio-economic change. The beginning of this story features the booming growth of industrial towns like Stoke-on-Trent in the UK, and Charleroi in Belgium. Unfortunately, these days, it doesn’t take long to find a grim narrative about post-industrial towns failing to adapt to the 21st century. Many of those narratives focus exclusively on economic issues, but cases like Brexit show how immigration can be more important to certain groups than the economy. If policy makers want to understand why strong economic arguments aren’t always enough, they must understand industrial narratives. The BRIGHT FUTURE project is a good place to start. Its research has shown the connection between local industrial narratives and the rise of right-wing populism. The project examined local narratives in five industrial towns across Europe and concludes, amongst other things, that policy makers must use local narratives to build up industrial towns, imports won’t cut it.  David Bole, the project’s coordinator, is keen to tell us about them in this interview.

There’s no such thing as an average industrial town

Defining what is and isn’t a post-industrial town is itself a problem. David provides a reason for this, “when I began my academic career, nobody was talking about post-industrial towns.” He recalls there was a research bias against them; “everything was about large metropolitan areas!” David found this troubling because most people in Europe were still living in these kinds of towns. Even the term post-industrial is problematic. Many towns with an industrial heritage “still have industrial elements in them.”

David also thinks an excessive focus on population size, has led us down the wrong road. He illustrates this by comparing how a small town in England and a small town in Finland mean very different things. BRIGHT FUTURE’s researchers were careful not to create a generic model of an average town that doesn’t exist in the real world. Although it wasn’t possible to reduce it to one definition, they did manage to reduce it to three.

Industrial town doesn’t necessarily mean what you think it means

David explains the differences between the three types of industrial town using their case studies. The first type, the historically industrial town, is exemplified by Corby (UK) and Heerlen (Netherlands). They are defined by their long histories in extractive industries, such as coal and steel. Nowadays, their economies are primarily based on services. However, these towns still have industrial buildings, museums, and what could be termed an industrial culture.

The second type is the post-socialist industrial town. Two examples from the project are Fieni in Romania and Velenje in Slovenia. These towns are still very much active hubs of industrial activity. Their industrial histories tend to be shorter than the first type, typically starting after the Second World War as opposed to the eighteenth or nineteenth century. Many of these have successfully transitioned into new industries.

Finally, there are the Nordic types. The project looked at one example, Kajaani in Finland. These towns are usually associated with non-extractive industries, such as fishing and woodcutting. David thinks Kajaani was a very interesting example because “the old wood cutting facilities have been turned into spaces for cultural industries.”

It’s not about the economy, stupid

David argues to fight populism, you need to know which kind of industrial town you’re in. He believes policy makers should think more carefully about this before importing successful ideas from somewhere else. He adds “it would stop us from doing things like using the same mantra about the creative class everywhere we go. You have to be place sensitive.” The project’s results demonstrate that people’s fears have nothing to do with the economy. He points to the Velenje case:

“The local manufacturing company, employing half the town’s residents, was bought by a global Chinese corporation.
Within a few months “you could see racist posters of a xenophobic nature around the town.”

The problem in Velenje was a communication one. The new corporation talked about creating productivity and reducing inefficiency in a way that made the local population very fearful and resentful. This was soon reflected in local electoral results. Although voters still overwhelmingly showed their support for social democratic politics, for the first time more radical and populist rhetoric was present in the campaign. David contends that policy makers have to understand how small-town mentalities actually work. He’s extremely quick to clarify he doesn’t mean this pejoratively. He thinks small-town mentalities embody many positive social norms, based on principles of belonging, community, and solidarity. Policy makers have to reflect these principles clearly in order to be combat populism. 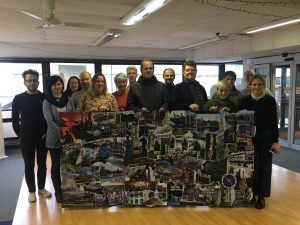 The stories that matter

The project used narrative analysis to get to the heart of stories and mentalities in small post-industrial towns. Narrative analysis involves going into communities in an informal manner to collect stories. By doing this, the project uncovered lots of surprising new information. As expected there were many interesting and unique stories, but there were only three types of story that could be found in every single town.

The first type is about the glorious industrial past. These stories are about past prosperity and long-lost security. David notes they can even be intergenerational stories. “Even people who weren’t born at the time tell these stories as if they can remember these golden years themselves.”

The second type of story is about camaraderie in the face of industrial decay. Although it sounds bad, people fondly recall stories of when “they fought together” and “the unions were on their side.” David thinks these stories are particularly important because they offer a positive framing of what he calls industrial values.

Contrastingly, the final story type revolves around the fear of change. These stories are all about being under attack. In these stories outside forces, like metropolitan policies and globalisation, undermine communal solidarity. David wants to emphasise that right-wing populists use these stories well. They successfully integrate them into their own agendas and use them to achieve electoral success.

David is confident this project is getting closer and closer to understanding the rise of populism. He describes how small towns are both progressive and regressive at the same time. When you see the Brexit map, you see there is a relationship between fear of change and voting behaviour. David attributes this to past policy makers adopting neoliberal developments that excessively focused on concepts like creative industries and knowledge economies, which felt alien to these communities. David strongly believes that “when you bring those kinds of policies into a very close-knit traditional community, built on values of solidarity, the fear starts to grow.”

Finishing the interview on a more positive note, David thinks the project has shown how policy makers can tap into the right kind of local story. Industrial towns have many positive qualities, they are resilient to economic crises and their culture of solidarity leads to “almost everyone” being involved in some form of voluntary work.

“Many of these facets could be used to generate positive change as long as policies are made “place sensitive.”