Finding solutions to complex urban problems like road safety and air pollution requires systems of reflection and refinement. Putting it another way, we have to make sure we learn from our failures. Europe is one of the most urbanised regions of the world. Seventy-two percent of its population lives in towns and cities. Despite the fantastic implications for economic growth, no one loves the air pollution and traffic issues that come with cities. In fact, air pollution can be catastrophic for public health, and road safety is still a major issue across the continent. Policy makers have the unenviable task of providing infrastructure solutions that satisfy pedestrians, motorists, cyclists, and businesses. It’s particularly difficult to find solutions that avoid potential conflicts between all these disparate groups whilst also making them all happy. Thankfully, city planners can find a helping hand in the LOOPER project. Read this interview with project coordinator Imre Keseru, to learn about the results and their methodology and platform for quickly finding and refining solutions that work for everyone. 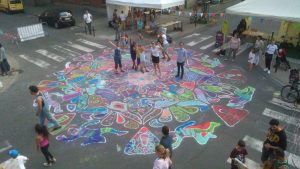 Imre begins the discussion by focusing on the fact citizens are frequently excluded from urban decision-making processes. Before the project started, Imre’s colleagues in Verona had been actively “trying to improve air quality in their city.” Yet, they saw that many relevant citizen groups (stakeholders) in Verona were absent in debates around air pollution and road safety. Wanting to rectify this, these researchers got in touch with Imre and his colleagues in Brussels. As they listened, the Brussels researchers recognised that they too were experiencing the exact same problem. They even noted that their colleagues in Manchester had said the same thing. This led all three groups of researchers to form a consortium with the aim of improving citizen engagement methods.

Learning Loops in the Public Realm: The three steps

LOOPER (Learning Loops in the Public Realm) is about creating a system that encourages learning through iterative improvement. It’s actually shorthand for Learning Loops in the Public Realm. The whole system is based on three steps being repeated and refined until the optimal outcome is reached. The first step is problem identification: this involves systematically categorising the desires of different citizens. The second step is all about co-designing solutions together, where citizens and policy makers collectively generate ideas, such as the creation of limited speed zones and evaluate them. The final step involves co-implementing and monitoring these solutions. Imre emphasises “when failures and conflicts are identified within a loop, these are recognised and modified in the next loop.”

LOOPER bases its approach on the idea local citizens, not outsiders, are in the best position to create and explore solutions for local problems. So, LOOPER’s researchers were keen to select a methodology that favoured a high level of citizen engagement.

“The team thought the Living Labs methodology was the perfect fit for this goal.
In LOOPER’s case, this has manifested in the form of workshops,
where municipal actors, citizens, NGOs, public transport companies,
and the police can collectively co-create solutions together.”

Although initially, this may seem like a very diverse group of stakeholders with little in common, Imre reminds us that “traffic and air pollution are complex problems that require collaborative action.” 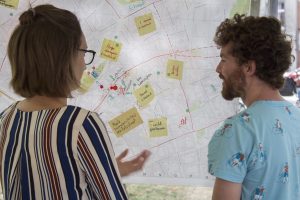 Finding a solution that works for everyone

Not wanting to make it all sound too abstract, Imre talks us through the outcomes of the first loop in Brussels. Here the research team focused their efforts on a neighbourhood that had a history of serious road accidents. In the local press, there was a well established narrative about fed-up residents frustrated seeing little real change in road safety. The researchers talked to residents on the ground to find out if the news narrative reflected their real concerns. It didn’t take long to confirm that what was seen in the news was broadly true and that people really were worried about traffic safety. Yet, they weren’t simply frustrated, they were actually eager to do something about it themselves. So, the researchers proposed that they “come up with some ideas together.”

In the end, the Brussels team collected forty potential solutions through their workshops in the project’s first loop. Imre says, “people came up with all sorts of interesting ideas from infrastructural interventions and route redirections to things like road safety training.” Still, finding lots of ideas for road safety isn’t hard, but finding ones that make everyone happy is much more difficult.

Even after accounting for expense, feasibility, and people’s preferences, the Brussels team was still left with five options on the table. So, they had to take the flexible co-creation process and merge it with a more structured evaluation. They did this by using a Multi-Actor Multi-Criteria Analysis (MAMCA). Imre explains:

“This involves taking the preferences of the different stakeholder groups
and feeding them through a software program that identifies
the potential synergies and conflicts for every proposed solution.”

In Brussels, the process showed that raising traffic safety awareness was the option that generated the least conflict and carried the most consensus.

Building safer roads is about working with what you have

Having settled on raising traffic awareness as the best course of action, the Brussel’s team created an initiative for local children to paint a mandala that warned drivers about the presence of children and other vulnerable people. Imre stresses this wasn’t the end of the project, it was only the end of the first loop. Analysing the impact of the first loop, using official speed measuring devices, the project found that an awareness campaign was not effective enough. So, more drastic action has to be taken in the next loop.

In the second loop, the project aims to use citizen science to involve local residents and gain finer data. This time the project is implementing the tougher measure of creating school streets, a temporary closure of streets in front of schools. In order to gain even more precise data for the next loop, some residents have agreed to have speed measurement devices installed into their windows. This will allow the citizens themselves to collect useful data that contributes to the LOOPER process. Imre argues that:

“LOOPER is a perfect example of how the involvement of citizens in research
can keep people invested in generating solutions for communal problems.”

Imre finishes the discussion by focusing on the project’s outcomes so far. He thinks they are definitely building a system with tools that have real potential for application in urban planning. However, they’ve also learnt the importance of engaging with local government. In Verona and Manchester, for example, the municipality was an active partner because they had seen that their citizens were already focused on the issue of traffic safety and air pollution. Whereas in Brussels, the team spent much more time setting up their network since the actors in local government needed more persuasion that citizen engagement on road safety was worth their time. Imre states this shows that you need buy-in from the local government if you want to persuade people you can make a difference. Nevertheless, in Imre’s eyes, these reflections aren’t negative, “this is all learning that just makes the next loop better.”