As part of the preparation of the next European Research and Innovation Framework Programme – Horizon Europe – new mechanisms for public-public partnerships are under development. One of the candidates for such a European partnership is Driving Urban Transitions to a Sustainable Future (DUT).  This partnership builds upon the achievements of JPI Urban Europe and aims to strengthen our joint efforts towards sustainable urban development and bringing knowledge and evidence into action.

The DUT proposal has been put forward to a variety of stakeholder consultations. The results of a public online consultation on the strategic process of shaping the new partnership are available on the JPI Urban Europe website. Furthermore, involvement of the AGORA stakeholder network took place in the form of two workshops. The results and inputs are summed up in the Report on the AGORA Strategic Dialogues, also available on the Driving Urban Transitions page. Since the partnership follows a challenge-driven approach and aims to co-design the programme together with problem owners and urban actors, in a next step city representatives were invited to join Focus Groups and help shape a multi-year programme. A series of three workshops was planned for each of the transition areas (called pillars), which were held between September and November 2020. As for the transition area on Positive Energy Districts (PED) the vision had already been set and the programme had already started, no workshop on elaborating a vision of this transition area was carried out. In this case, the city representatives were invited to join two workshops only. 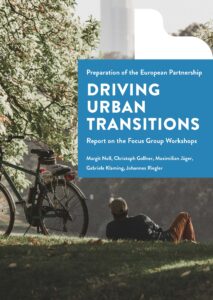