FUSE (Food-water-energy for Urban Sustainable Environments) is a transdisciplinary 3-year research project (2018-2021) involving the Food-Water-Energy Nexus (FWE) in Pune (India). Earlier this year, the project organised workshops in Pune using a Sustainability Living Lab approach. Results and outcomes are now available in their published report, to be accessed here.

Documentation of Stakeholder and Expert Workshops in Pune, India
The city of Pune is located in a growing metropolitan region in the Indian state of Maharashtra. More than 5 million people currently live in this region and it is foreseeable that it will grow significantly in the future. Intermittent freshwater and energy supply and competition between urban areas and agriculture for water and energy characterize key elements of the region’s stressed FWE systems.

To integrate knowledge, expertise and views of local actors, FUSE adopts a Sustainability Living Lab (SLL) approach. The SLL approach includes a stakeholder analysis and two series of workshops. The FUSE team collected, documented and processed the information gathered during the workshops and will include it in different parts of the model and other elements of the research. 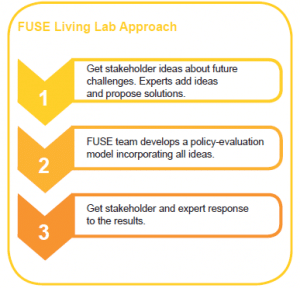 About FUSE
The FUSE project develops a long-term systems model that can be used to identify viable paths to sustainability. It brings together scientists, engineers, economists, and stakeholder engagement experts from Stanford University in California, USA, IIASA (International Institute for Applied Systems Analysis) in Laxenburg, Austria, UFZ (Helmholtz Centre for Environmental Research) in Leipzig, Germany, and ÖFSE (Austrian Foundation for Development Research) in Vienna, Austria. The project is a not-for-profit research effort and is part of the Sustainable Urbanisation Global Initiative of JPI Urban Europe and the Belmont Forum. Each of the national teams is supported individually by its own national science funding agency.