Radically reducing food waste should be an important objective for urban decision makers across Europe. The U.K. throws away about £13 billion per year as avoidable food waste, while in the city of Bristol alone it is around £151 million. Daniel Black and Marco van de Wiel from the WASTE FEW ULL (Waste Food-Energy-Water Urban Living Lab) project, one of 15 projects funded in the SUGI FWE Nexus call, explain how their work is attempting to address this problem in a case study on Bristol’s food waste.
By Shafayet Choudhury
Published: 31 March 2022
Share this article:
facebook   |   Twitter   |   LinkedIn

The models and conceptual framework developed in the project offers valuable insights on how food waste impacts other systems and identifies the decision-makers that determine policy. Policymakers can use these models and tools in their efforts to integrate water and energy into waste policy.

Food waste not only represents a financial loss for ordinary households, but it also contributes to significant strains on the environment (in particular: carbon emissions, air pollution and eutrophication) and puts additional pressure on local governments responsible for waste management. Social and environmental costs are not adequately accounted for in existing cost-benefit analyses; perversely, wasted food can be seen as an economic benefit. Existing policies pay insufficient attention to how waste management impacts other vital urban systems (like water and energy) or the economy. WASTE FEW ULL seeks to address these overlooked issues by developing and testing new integrated approaches from the fields of economics, systems dynamics, and participatory scenario analysis, working with key city experts, infrastructure owners, processors, and stakeholders.

One of the early notable project findings shows that it is far more impactful on the environment for policy-makers to focus on reducing food waste than it is to increase recycling. One of the project’s researchers, Eleanor Eaton, conducted a detailed non-market microeconomic valuation  (a small-scale economic assessment valuing goods, services and resources that are not defined by market prices), modelling a 20% reduction in food waste against a 20% increase in recycling. The results clearly show that reducing food waste can be up to sixty times more effective than recycling in reducing carbon emissions. The results also show that reducing food waste reduces pollution of the marine environment, whereas recycling may increase marine eutrophication (a process leading to harmful algal blooms and dead zones). It is important to note, recycling is still preferable to other disposal methods such as incineration or landfill. While this is widely understood by those working in this area through the ‘Waste Hierarchy’, stakeholders working on the project saw this as important evidence to help make the case for action in the area of waste processing and minimisation. 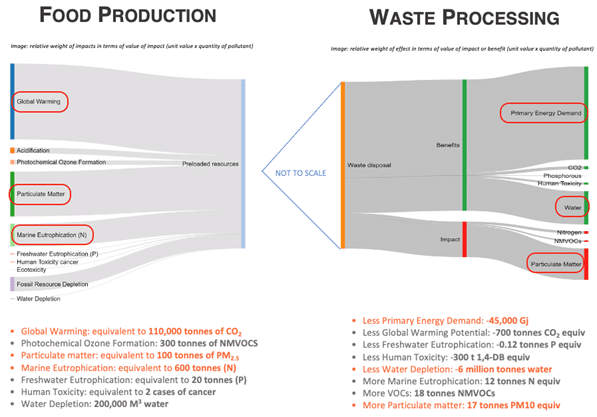 This study was complemented by a conceptual and newly integrated macroeconomic valuation (a large-scale assessment of economic activity) that sought to help Bristol understand better its transition pathway towards achieving its target of becoming a Zero Waste City by 2050, as set out in its One City Plan. This participatory, scenario-based valuation, led by Daniel Black and Dr Taoyuan Wei, was developed drawing both on the ‘x-curve’ concept, developed by the consortium’s partners in the Netherlands (Loorbach D, 2017), as well as methods from participatory scenario planning (e.g. Hoolohan et al, 2019). By considering both the good practice that needed to be scaled up, as well as the bad practice that needed to be scaled back (i.e., wasted food), it was clear that the One City Plan was focusing solely on the former, and hence the focus of the valuation on the latter: i.e., who might lose out in this transition to Zero Waste 2050? 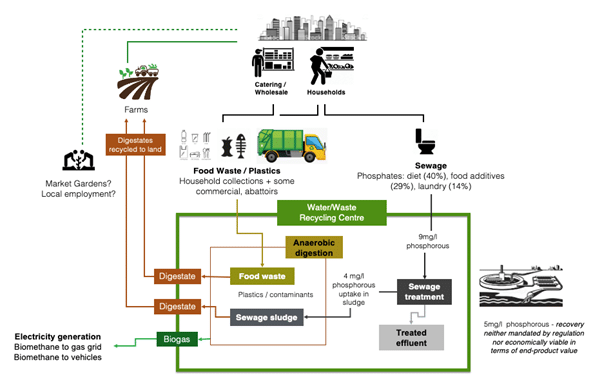 Following considerable liaison with stakeholder partners in the Urban Living Lab, the study developed four economic scenarios based on two different food waste trajectories (current and Zero Food Waste 2050) and two different spending scenarios (no re-spending and re-spending). The results show that, with no re-spending, there could be a £4.6 billion decrease in economic activity on a national level associated with that reduction in food purchasing with food retail and logistics being the hardest hit. Yet a much more likely scenario is that consumers would spend their additional disposable income elsewhere, such as on vacations or clothing, which could therefore result in an overall increase of £702 million in the economy. The valuation also shows limited carbon impacts at current carbon prices.

In other words, there are clear risks to significant parts of the food economy in achieving city transition to Zero Food Waste 2050, and it requires careful intervention by central Government to deliver. So, it is up to cities to understand this national context well in order to understand exactly what they can do themselves. Daniel is continuing to work with Bristol’s Food Waste Action Group to develop this investigation further.

Another important project output was the development of a new conceptual framework. The CE-Nexus framework leverages the waste minimisation advantages of the Nexus Approach without losing the recycling advantages of existing models. The CE-Nexus framework does this by integrating the Circular Economy (CE) model with the Nexus Approach. The CE emphasises recycling and reusing raw materials, produce, components and products. Unfortunately, the weakness of the CE model is that it can contribute to the Waste-Resource Paradox, whereby waste commodification creates businesses and infrastructure reliant on increasing or maintaining waste streams. On the other hand, the Nexus Approach focuses on reducing waste production by maximising the efficiencies generated by integrating food, energy, and water systems. Since eliminating waste production entirely is impossible, this conceptual framework offers decision makers and academic researchers a starting point to develop systems that take advantage of both models. 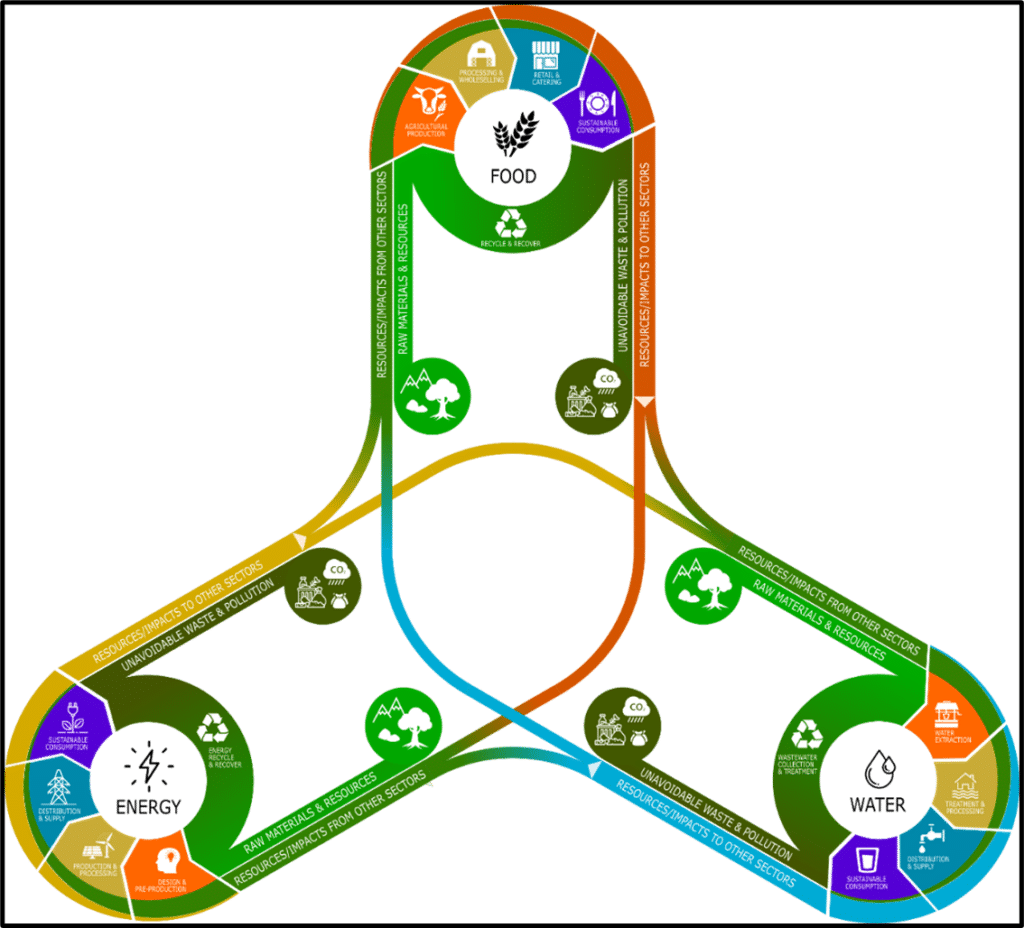 The project brought into focus the many dilemmas faced when changing urban systems. The drive to reduce inefficiencies (measured in financial terms) is in tension with efforts for sustainability, as well as maintaining the resilience of the systems involved: their reliability and safety, such as their impact on public health and social justice. Essentially do these systems treat people fairly? This led to the development of another conceptual framework: the Hexalemma framework. It highlights six aspects of systems that conflict and co-operate at the same time. The Hexalemma framework looks at quality, care, and allocation of scarce resources. This offers a systems approach to understanding the conflicting demands in the nexus, vital for policy development and decision making to minimise unintended consequences.

Along with these conceptual frameworks, the project created a resource flux model showing how food moves through the supply chain and interacts with other critical urban systems. This model, produced by Ali Parsa using the STELLA systems dynamics modelling tool, can show a user how altering a single variable, such as waste production, can impact the amount of biofuel produced or water consumed. Marco van de Wiel says Ali’s model explicitly shows how the food waste and energy sector interact as well as how the food sector connects with the energy sector. One of the important preliminary outcomes of Ali’s work is that it corroborates Eleanor’s findings: waste minimisation is far more efficient and far better than other types of waste intervention.

Seeking to further collective understanding of decision-making networks, Waste FEW ULL has produced a detailed network analysis that demonstrates how well-established, institutional actors constrain disruptions to existing waste management systems. The analysis, conducted by Matt Johnston, offers visual representations of the decision-making networks in three of project’s participating cities: Bristol, Rotterdam, and Cape Town. Using an agent-based model (a computational model simulating the actions and interactions of autonomous agents) to recreate these networks, Matt shows how networks evolve from existing structures and certain actors become powerful players. The incentives of these actors then directly impact whether a waste minimisation idea is likely to gain acceptance. For example, if the network’s dominant energy actors rely on food waste for energy production, then waste minimisation efforts presented by a relatively new actor are unlikely to gain traction. Marco adds that the modelling work was not done in a purely abstract way but was very much informed by the valuable stakeholder work done within the project by Jana Fried and Richard Nunes.

The work in Bristol would not have been possible without the full support of the WASTE FEW ULL Consortium partners. Particularly essential stakeholder partners in Bristol include  Joy Carey (Bristol Food Network), Dan Green (Wessex Water), Simon Roberts (Centre for Sustainable Energy), Gwen Frost (Bristol Waste), and Sarah Hargreaves (Resource Futures). On the academic side, the research outputs could not have been produced without the tireless coordination of Sue Charlesworth and the research findings of Adina Paytan, Francis Rayns, Ulrich Schmutz, and Alistair Hunt. They hope that future research can make use of their Nexus-based conceptual models and findings to create minimisation practices without detrimentally impacting other urban systems and unhealthily valuing waste.