Appropriate co-operation agreements and processes between city administrations, utilities and real estate developers are prerequisites for the successful implementation of sustainable climate-neutral neighbourhoods. Therefore, the PED Programme is conducting a webinar series targeting these key areas of process success. The first episodes are out!

Together with representatives of the main problem owners – city administrations, real estate developers and utilities -, we would like to exchange experiences regarding successful cooperation models for developing such innovative neighbourhoods. Based on concrete practice examples, the aim is to learn from good and bad experience and to support discussion of key challenges, strategies and governance processes. 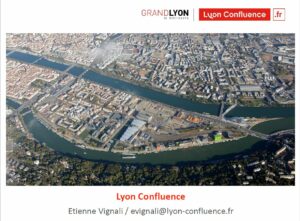 Located in Lyon, La Confluence is one of the largest city centre extension projects in Europe. Stretching over 150 hectares at the confluence of the Rhône and Saône rivers, the site offers an exceptional environment, right in the city centre, bordered by water and hills, with more than 1.5 km of promenade on the banks of the Saône.

The transformation of the industrial wasteland is carried out in two phases and is designed as a life-size laboratory of the intelligent and sustainable city. The urban development will be completed by 2025. Lyon Confluence was the first Sustainable District to receive the WWF label.

The local public company Lyon Confluence has been the development planner of the urban reconversion project for 20 years and is acting as the main interface between the city administration and the real estate developers involved. The company was created in 1999 by Métropole de Lyon and heads the development in accordance with the guidelines provided by the elected officials.

Find more information about the project area and the company on the website of Lyon Confluence. 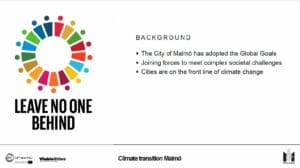 The development of Hyllie, in the southern part of the city of Malmö, comprises the construction of 9,000 houses and 9,000 workplaces in a dense city structure. A sustainable approach to energy supply, transportation, waste management and recycling are cornerstones of the project.

Already in February 2011, the City of Malmö, E. ON and VA SYD signed a Climate Contract for the realization of Malmö’s largest development area. This contract is the basis of joint efforts and governance of the whole development process. Since then, Hyllie has been a testbed of innovation. The cooperation is unique and the lessons learnt could be scaled up and/or applied to many other municipalities. 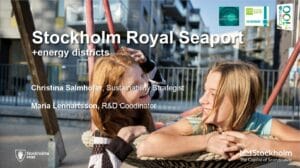 Stockholm Royal Seaport is one of Europe’s largest urban development projects. Former industrial areas are being transformed into an urban environmentfor 12.000 dwellings and 35.000 working spaces by the year 2030+.The land is managed by the City Development Administration which also manages the project in close co-operation with other City of Stockholm administrations and companies. In 2009, Stockholm City Council decided that the urban development project was to be a model in sustainable urban development. Structures were established to enable administration- and company-wide working groups, including municipal experts, to collaborate. The City of Stockholm owns the land and the requirements are included in land allocation- and development contracts. These requirements are reviewed and verified at all phases of a project. Working groups continuously evaluate results. Continuous capacity development is crucial to meet the project’s high ambition levels.

For further information about the project see the website of Stockholm Royal Seaport. 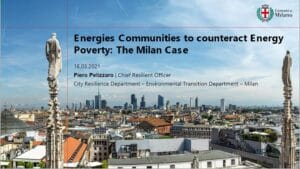 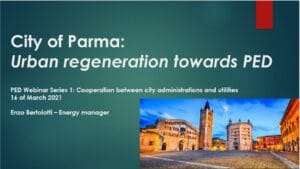 >> Watch video recording on the City of Parma on Youtube

After an introduction on the ambition of building an Italian PED city network, representatives from the cities of Milan and Parma presented their respective policies towards PEDs and shared experiences gained from implementing their strategies. Piero Pelizzaro’s presentation focused on Milan’s activities towards activating Energy Communities and the implementation process in Milan’s Chiaravalle district. Enzo Bertolotti discussed Parma’s experiences in developing a district heating network through public private partnerships and the city’s co-operation regarding two innovation districts – North District and Castelletto – with IREN and Veolia companies.

This website uses cookies to improve your experience while you navigate through the website. Out of these, the cookies that are categorized as necessary are stored on your browser as they are essential for the working of basic functionalities of the website. We also use third-party cookies that help us analyze and understand how you use this website. These cookies will be stored in your browser only with your consent. You also have the option to opt-out of these cookies. But opting out of some of these cookies may affect your browsing experience.
Necessary Always Enabled

Any cookies that may not be particularly necessary for the website to function and is used specifically to collect user personal data via analytics, ads, other embedded contents are termed as non-necessary cookies. It is mandatory to procure user consent prior to running these cookies on your website.