Are you ready for a different smart urban future? Stakeholders in over 76 cities and 20 European countries have been involved in ENSUF projects 2015–2021. You can now access the synthesis of the call. Learn about ENSUF's connection to urban policy agendas and methodological success factors, such as capacity building for involved stakeholders.
By Caroline Wrangsten
Published: 3 November 2021
Share this article:
facebook   |   Twitter   |   LinkedIn

In 2017, fifteen R&I projects were approved in ERA-NET Cofund Smart Urban Futures (ENSUF), a collaboration between JPI Urban Europe and the European Commission, to address urgent and long-term urban challenges by co-creating ideas and projects. Now, a majority of the projects have challenged “business as usual” in urban infrastructures and governance. 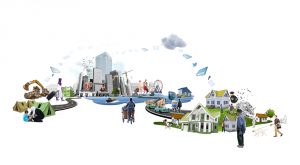 Projects worked with “smart urban futures” by means of how learning, narratives and place development is currently practiced in European cities, and where this is taking us. They can now suggest ways forward by uncovering the added value of their results- and integrated approaches at large. For instance, the ENSUF projects worked with strategies for smart urban transformation, growth and shrinkage, public services, and ways to develop inclusive, vibrant, and accessible urban communities. Of course, these are all so called wicked issues. So, if you are interested in handling urban dilemmas, you’d be pleased to find that the project results in the catalogue has been tagged with the dilemmas that each project can correspond to the most…

“The creative practices developed by the researchers to collaborate with residents in urban living labs are potentially useful for future initiatives, related to the New Green Deal and New European Bauhaus.”
– Jonas Bylund during the ENSUF synthesis webinar

Two different reports have been created. Report one looks at the quantative outcomes of the call and connects it to relevant policy agendas. Report two builds from an interview study where the coordinators of four ENSUF projects were interviewed about their methodological success factors, long-term prospects, and ways to build capacity for stakeholders involved.

Calls by JPI Urban Europe emphasize science-city cooperation and challenge-driven R&I where results help cities build capacities for urban transformation processes.  The program actively manage a project portfolio, analysing how projects funded in the different calls relate to the thematic priorities of the JPI Urban Europe’s Strategic Research and Innovation Agenda (SRIA 2015), the dilemmas of the SRIA 2.0 (2019), as well as international and European policy agendas, including the Urban Agenda for the EU and the Sustainable Development Goals (SDGs). 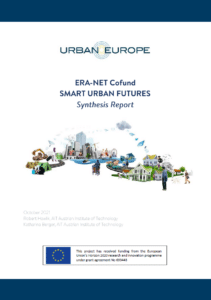 “The cities engaged in the projects goes beyond the countries participating in the ENSUF call. For example, the project Smart-U-Green worked with the local authorities in Belarus (Mahilioŭ) and Russia (Pskov) to co-create knowledge on new options for governance”

Four ENSUF projects have been interviewed about their capacity building, legacy, and methods that were proven successful. Which capacities were built in the projects on their different sites, and what are the lessons learned? Five lessons about impact and capacity building from ENSUF-project interviews are outlined in the report: 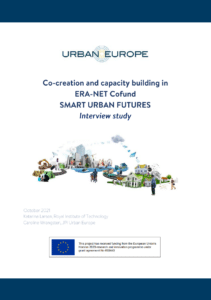 “Legacy in ENSUF departs from co-creation processes being integrated in the project design already when planning and applying for funding.”

Smart urban futures according to ENSUF

Multiple urban policy agendas attempt to cover the entangled, integrated, and complex characteristic of cities and urban areas. The type of knowledge to not just deal with but also develop and thrive in these environments, is not always easy to pinpoint. On the one end, we know that business as usual is not an option. On the other hand, we’re sometimes locked into both infrastructural and mental systems and ways of going about urban life. In other words, when it comes to realising not just sustainable but also robust and regenerative cities, the “how” seems more important than the “what” and the “why”, at this stage. However, the “smart” in “smart urban futures” is not always what is sounds like, at least not when it comes to the “how”. The usual definition of a “smart city” is that digital tools and ICT are key components. But according to ENSUF outcomes and policy recommendations, smart urban futures are:

1) Where cities both grow and shrink…
… while benefiting from each city’s given culture, history and prerequisites

Here, local authorities of growing or shrinking cities re-discover and re-govern their cities together with inhabitants and manifold stakeholders. Perhaps manufacturing is brought (back) to the city centre (Cities of Making), or industrial towns revive in pride thanks to old and new stories coming together (BRIGHT FUTURE). Here, urban immigration and emigration is constant and somewhat unavoidable, but with the right tools (see GLIMER) it can support all parties involved.

How can your city grow or decline in the best way? What is smart shrinking? In the wake of the corona pandemic, even more city centres than previously expected must ask themselves this question. Urban shrinkage happens all across Europe: one in five cities in the EU today is experiencing population loss; in eastern Europe this figure reaches 70%. Though appearance of shrinkage is fairly universal— empty city centre shops, falling property values, reduced town-centre vibrancy – causes for urban shrinkage can vary. By learning from the experience of the cities that once were on the edge of an abyss but have bounced back to life, and by sharing the key ingredients of their success, ENSUF project 3SRecipe enabled shrinking cities to adapt, transform, and thrive in the face of continuously and often dramatically changing circumstances (see 3SRecipe).

Urban dwellers go from modern life’s separation from nature, to making and having natural elements as key “stakeholders” in their life, for example by predicting and preparing for flooding using joint systems (see FloodCitiSense, FloodLabel). In this sense, there is an element of going “back to the future”- as the revisiting ideas are those who made populations prioritise agglomeration (of resources, humans, and homes) and create cities in the first place. Historically, we built our joint homes close to each other, guided by direct local needs and practical experiences of “what works”. Today, decisions are taken further away (administratively speaking) from the everyday life experience.

In a smart urban future, cities are regenerative, they “do more good than bad” in a sustainable sense. Which is why producing new low-carbon buildings and infrastructure is insufficient, the majority of the built environment needs adapting and regeneration to fit future needs. The process of regeneration can hold multi-functional elements and bring more values than the finished product in itself, especially when urban living lab methods are applied (see SOHOLAB).

In smart urban futures, knowledge and experiences are not just stored in books organised in libraries, but produced inside libraries (PLACED). The municipality is not the sole player visualising the future of city neighbourhoods, but community based-visioning and designs come together in learning loops (LOOPER). Similarly, municipalities instead support intermediaries, so called community makers, to align changes with local circumstances in cost-effective manners (Smart Urbi).

Universities change from relatively closed institutions to active and present stakeholders with an open-door policy in not least deprived urban areas (SOHOLAB). Where public goods and urban commons were previously subject of conflict that paralyses situations and leaves matters to status quoe, co-creating public space is norm because there are ways to handle difficulties and dilemmas in the process (see C3Places).