Home > News > “You were doing nexus before nexus was cool!” This was the SUGI Nexus Final Event

“You were doing nexus before nexus was cool!” This was the SUGI Nexus Final Event

It’s a (global) wrap! Some seven years later, the global SUGI team came together for a proper goodbye, or should we say, an inspirational “see you later”… Sustainable Urbanisation Global Initiative (SUGI)/Food-Water-Energy (FWE) Nexus is the success story on many funding agencies’ lips, and Belmont Forum, Future Earth, JPI Urban Europe and the European Commission made this very clear when thanking the 15 funded projects for their R&I contributions to the global sustainability scene. What did the projects conclude in their final get-together, and what happens next?
By Caroline Wrangsten
Published: 31 March 2022
Share this article:
facebook   |   Twitter   |   LinkedIn

The food-water-energy nexus, circular economy, doughnut economics, resource circularity, regeneration, greening cities, holistic sustainability, circular urbanism… We have many names for the things we love. What matters is that cities and urban areas can transform into more sustainable spaces and operate within planetary boundaries.

Is the FWE nexus a too abstract term for policy and practice? Could be. The question was aired during the final event, and participants were relieved to know that the “green pillar” in the Driving Urban Transitions partnerships instead terms things “circular”- Circular urban Economy (CUE). But the core is still there (in CUE, that is)- namely the systems perspective:

“FWE nexus is missing in European policy, a whole world is however dedicated to circularity. If you want an impact in the FWE nexus approach, you need to connect it to the circular economy term – also in future calls.”

Projects that conducted interviews with city managers and local policy makers reported that indeed, food water and energy are rarely combined in urban development and planning. The hurdles for this are built into the management structure to an extent that it is not incentivized to work cross-silos in cities: “There is simply no career perks for this type of behavior. Sorry, but that is the crass truth!”. City managers need to find ways to concretely bring cooperation across thematic boundaries into employee’s yearly evaluations. In other words, urban managers have to “incentives a food-water-energy nexus behavior”- not punish it… Several SUGI projects tried to challenge this when they worked together with different city administration.

“There are simply no career perks for this type of behavior today. Sorry, but that is the crass truth!”

On a similar note, projects found out, studying policy documents and interviewing urban policy makers, that the FWE-nexus knowledge is poor in cities. Most of the times, interventions navigate from either energy, water OR food- but almost never combined, never from a systems perspective…

The barriers are found even in public regulations- it is by law not allowed to turn rainwater into drinking water, even if you purify it.  Recycling food waste also has plenty of regulations. There are plenty of barriers in polices to be able impose the nexus, concluded the participants. One person even reported that their national governments consider the FWE nexus a matter of export of technology and expertise. Their national policy makers have put the FWE nexus issues in the ministry of foreign affairs, together with trade matters.

CITYFOOD decided to pass their urban living labs on to other stakeholders. Their different labs are now run by a prison, a school, and at university campuses. Staff in these facilities were trained to keep running the labs also after the project ends. Academic researchers continue to stay involved and bring data into the academic field.

“Staff in these facilities were trained to keep running the labs also after the project ends.”

What do you want to nexus?

This question was raised in one of the breakout sessions with the intent to challenge which urban topics are combined and not. If working across silos really is the ambition, then it is important to not hand out a fixed box- but instead promote nexus-thinking in a wider sense. Food turned out to be a very successful focusing point because it was easier for people to relate to. In developing countries, you can get an income from food- but not really from water or energy. The IFWEN project, having been active in South America and South Africa, paid attention to the connections to health and nutrition in the FEW nexus. They collaborated with school gardens to incorporate healthier meals, education and agricultural skills. The academic researchers explained that working together with practitioners gave them energy and motivation to advance the projects during all these years.

“Loads of things was already going on but were not connected to each other, and this is where we could step in and build capacity”

The participants concluded that bridging communities is a capacity building aspect. Several projects brought resources and helped innovate in between different sectors. They have noticed that mistakes are made in the startup scene due to lack of the knowledge that academic scientists has acquired in this field. These types of calls, collaborations and transdisciplinary projects can in other words support the start-up scene and void time wasted. CITYFOOD noticed that one start-up failed cause of the level of mathematical calculations and balancing systems was insufficient – and indeed, for small teams and start-ups it is difficult to advance this type of modelling.

In plenary panel discussion, Ugo Guaranacci from the European Commissions explained that SUGI helped shape the Smart Cities Partnership in the new Horizon Europe because in SUGI there were instruments developed for how to work across silos, across thematic focuses and even across geographies.

“I always go to SUGI projects when people want successful examples of cross-national research- and innovation collaboration. This is where I go for good practices, because you were doing nexus before nexus was cool. So this room is full of forward thinkers”
– Nicole Arbour. 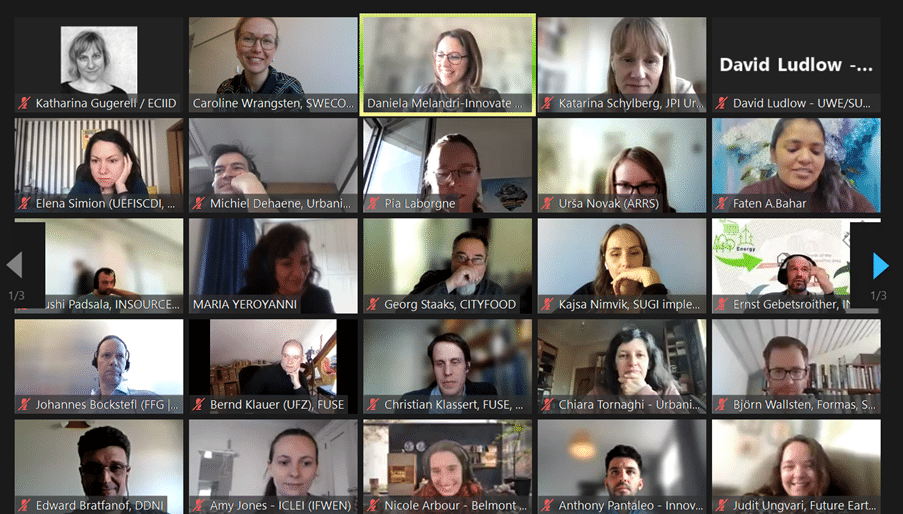 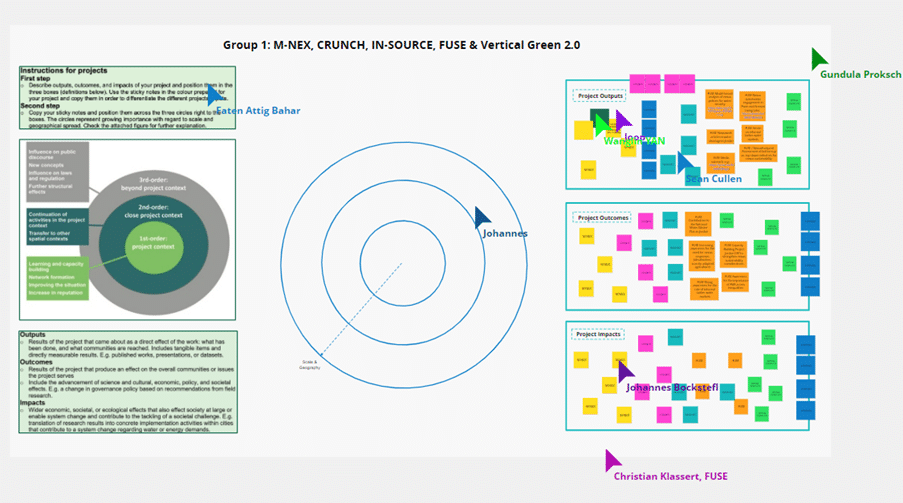 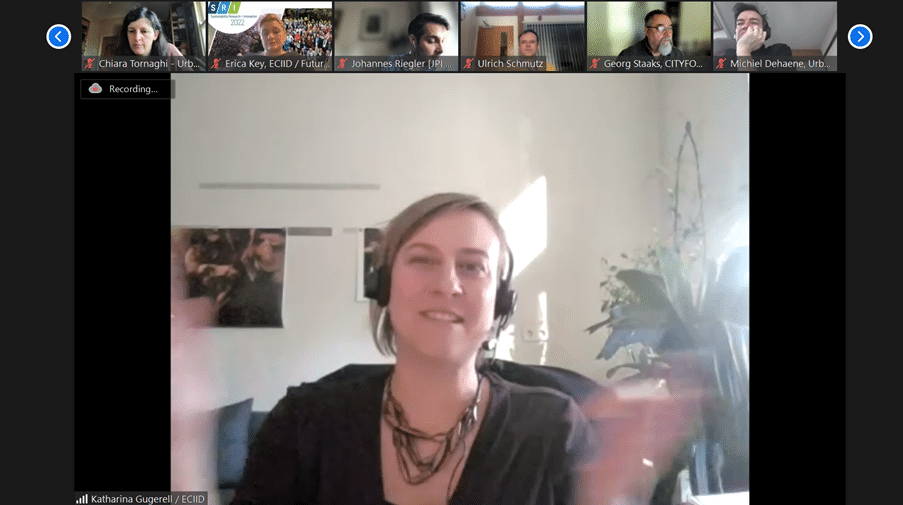 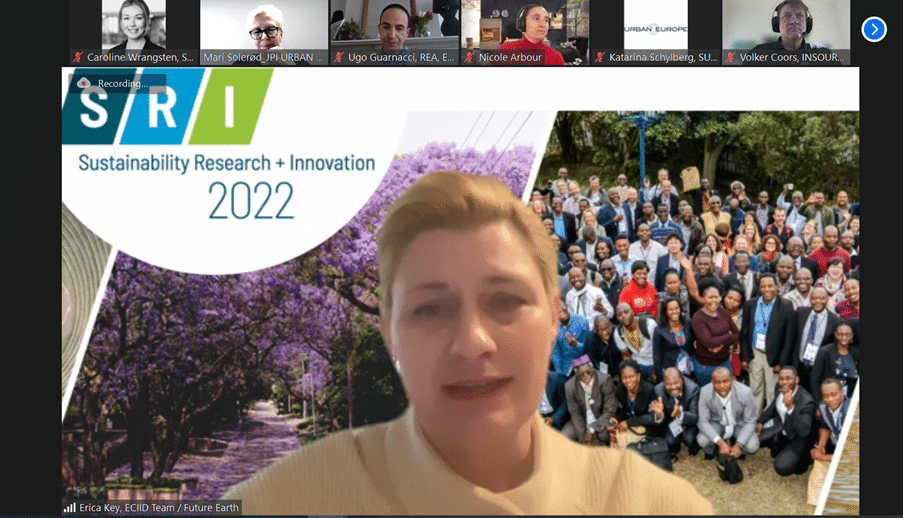