Cities of making explores opportunities for strengthening urban based manufacturing in European cities following years of decline and offshoring.

As a part of the ENSUF call between 2016-2019, the Cities of Making project produced several reports, policy recommendations and films, along with a guide for 21st Century Cities of Making.

Foundries of the Future: A Guide for 21st Century Cities of Making

The guide (full title: Foundries of the Future: A Guide for 21st Century Cities of Making) aims to show that despite perceptions, manufacturing is not in terminal decay in western cities.

On the contrary, it is at the 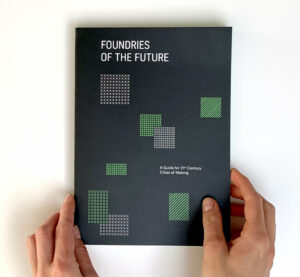 opening of a new chapter. Urban manufacturing is helping cities to be more innovative, circular, inclusive and resilient. Recently, with increasing interest in the circular economy, with cleaner and more compact technology, with more progressive building codes for mixed use, with increasing awareness of the impacts of social inequality and with a clearer understanding of the value chains between the trade of material and immaterial goods, cities across the world are realising that manufacturing has an important place in the 21st century urban economy.

Cities of Making: The Cities Report 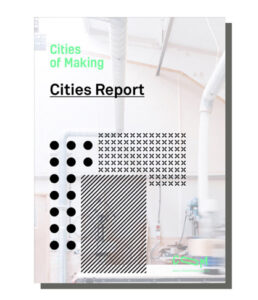 The Cities of Making ‘Cities Report’, offers an insight into urban manufacturing in three global cities – Brussels, London and Rotterdam. Each city has had a distinctive industrial heritage and is interpreting the future of manufacturing in very different ways. This report exposes unique qualities of each and common trends that may be relevant to many other European cities who are grappling with the future place of making.

Interested in more results from the Cities of Making project? You can see the full list here.

Using a combination of strategic and action research, our ambition is to identify what works in supporting a resilient and innovative industrial base, and to test those solutions in a real-world setting. We will learn from experiences in London, Rotterdam and Brussels – each with a distinct industrial heritage. By the end of the project we will have developed ideas, practices and policies focusing on public authorities (and many other relevant stakeholders) to breathe new life into their manufacturing communities.