Urban beauty isn’t just in the eye of the beholder. If we are to transition our urban landscapes into greener and more sustainable spaces, we need a new kind of governance. Making cities sustainable is one of the key aims of our age. This is reflected in the United Nation’s Sustainable Development Goal to “make cities inclusive, safe, resilient and sustainable.” Although we can use empirical standards that measure sustainability, safety, and resilience, it’s much trickier to create truly inclusive cities that meet the needs of all. Even within the same city, different actors frequently have conflicting ideas about what constitutes good urban land use. SMART-U-GREEN is a project that examines these conflicts in six countries (the Netherlands, France, Italy, Croatia, Russia, and Ukraine). The project has analysed existing governance structures for their capacity to create urban landscape solutions that are both sustainable and inclusive. Matthijs Hisschemoller, the project’s coordinator, is keen to tell us what they’ve learned… 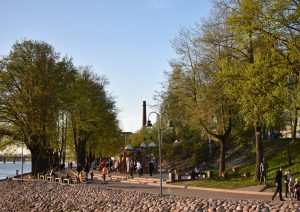 Good objectives and finite land are a recipe for conflict

The project has already discovered three main governance objectives that tend to create conflict over urban landscape design. The first is to preserve ordinary urban landscapes; these are spaces people associate with identity and belonging. The second is to create environmentally sustainable urban landscapes. The third is to create economically viable urban landscapes. Matthijs offers an example of how these objectives can clash by pointing to the Drechtsteden region. The Drechtsteden region is a low-lying river area, in the Netherlands, vulnerable to climate change. It’s also an old industrial area with an aging working-class population that needs to attract new economic activities to be economically sustainable. Current government practices and routines make it difficult to generate urban landscapes design that are considered sustainable from both ecological and economic perspectives.

“The project has found that existing conflicts are exacerbated by a governance bias towards projects that make building and transport infrastructure- over the ones that create new green spaces or that preserve existing spaces.”

Matthijs explains that “these are the only kind of urban landscapes that directly generate income.” Accounting for this, the researchers have made an effort to include the views of relevant citizens and non-government actors. In trying to find areas of consensus between all of them, the project has used an interviewing method called repertory grid technique. It works by getting all the interviewees to randomly pick three pictures (from a selection of eighteen) showing different urban landscape features. These pictures are then compared and contrasted to construct ideas about good and bad landscape features. This method has turned out to be a great success in that it revealed a number of joint stakeholder aspirations.

We have more in common than that which divides us

Even though the project is being conducted in completely different countries, it has revealed two universal desires. The first is that everyone wants more public space. Despite differences in how people want to use public space, everyone agrees it has to be inviting, lively, and offer a sense of belonging. The second thing everyone tends to agree on is the principle that there should be more greenery in the urban landscape.

However, stakeholders from different regions also expressed several contrasting ideas. For example, stakeholders from Italy and Russia stressed the importance of order and accessibility as key concerns, whereas a stakeholder from France stressed the relevance of uncovered soil, permeable to water. Matthijs notes that the project has gathered a lot more data than they initially anticipated, so they are still uncovering new areas of consensus and disagreement. On balance, Matthijs thinks this project has shown people have more shared values than differences. 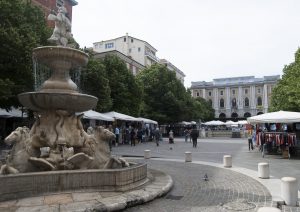 The power of the people’s perspective

Now that we know consensus does in fact exist on what good urban landscape design looks like, governments have to do more to focus on these areas of agreement. Matthijs thinks including citizens in the decision-making process is the key to achieving this. In his opinion, historically, there have been a lot of coalitions between local governments and local developers, and not enough between local governments and their citizens. He says “we might not be able to deal with all the contradictions immediately, but we can build a stronger coalition between policy makers and citizens.” He reasons strong coalitions are more motivated to persist when searching for solutions that satisfy everyone.

Nevertheless, this project has also shown that not all governments are the same, some have very little interest in consulting their citizens. The project observed that in the Dutch case, people are used to the polder model, a system of governance based on the principle of dialogue and letting everyone have their say. Contrastingly, the project’s researchers in Croatia expressed that the local government was not very used to entering into a dialogue with its citizens. Therefore,

“Governments have to reflect carefully on their existing political cultures if they want to genuinely generate urban landscape solutions that make their citizens happy.”

Don’t be idealistic about sustainability and democracy

Having extolled the virtues of citizen engagement, it’s important to remember democracy and sustainability don’t always go hand in hand. We shouldn’t forget, people have emotional connections to the urban landscape. However, unsustainable urban landscapes may have shaped peoples’ sense of identity in such a way that they have become alienated from nature. Matthijs thinks, “quite a few people don’t want to live in a natural environment. If they have a community garden, they are afraid of flies, insects, and dirt.”

Some people have lived in urban environments for such a long time that natural environments actually feel unnatural to them. In some cases, people would rather have a warehouse than a natural green space as they see the economic value of a warehouse but see little value in the natural environment. So, instead of being idealistic about sustainability and greening urban landscapes, we have to engage with people and win them over to a greener point of view.