SoHoLab: Why inclusion and storytelling is key to upgrading social housing estates

In many European countries, social housing estates are in dire need of renovation and investment. Yet, when changes are made without listening to the voices of local residents, the wrong decisions can be taken. The Grenfell tragedy in the UK is one of the most terrible and stark examples of this. It is clear that things have to be done differently and residents need to be heard. The project SohoLab offers insights into how this could be done in a better way. Michael Ryckewaert, SohoLab’s coordinator, tells us what the project uncovered and how social housing redevelopment could be approached in the future… 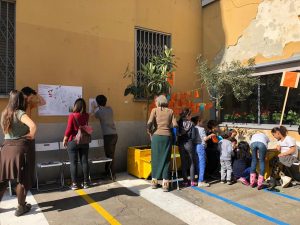 Michael thinks it’s often poor organisation which is primarily responsible for the exclusion of local perspectives. Since this problem is found in cities all over Europe, it made sense to analyse housing organisation and planning on a European level. The project’s cities (Brussels, Paris, and Milan) were all in different countries for this reason.

The three cities embodied totally different approaches to social housing. The Paris case represented a very centralised approach. Here there was one very large housing association and the renovation of the estate was guided in a top-down manner by the local mayor. In Milan the picture was very different; following years of reduced investment and management, local associations and citizen groups were a much more central force in housing issues. Lastly, Brussels represented a mix of approaches somewhere in between the first two.

Living in estates is the only way to understand them

Putting local voices at the centre of social housing meant picking the right research approach. SohoLab’s researchers believed the Living Labs methodology was the best one for prioritising residents. Living Labs are essentially research projects where experiments are conducted in the real world. This means researchers are far more actively and consciously involved in their work. Michael articulates how a close relationship with residents allowed the project’s researchers to quickly dispel their own inaccurate preconceptions. He says:

“We thought our main focus would be on the public spaces in those estates: car parks, the green environment,
the playgrounds, etc., but through our interactions with the residents,
we learnt that actually it was the quality of their housing units themselves that were of very great concern to them.”

Through their discussions with local residents, SohoLab’s researchers narrowed their aims down to a few core objectives. The first was to become a voice for these residents. Michael offered a practical example: in the Brussels estate, there were eighteen high rises requiring interior renovation. Initially, the architects responsible for housing renovation wanted to install new combination bathtub and shower units into all the residences. They thought this would offer residents greater choice and flexibility. However, together with the social assistant, the project’s researchers quickly identified a serious problem with the architects’ plan: many of the residents were elderly and were suffering from mobility issues. Naturally, many of them found the idea of having a shower in a bathtub impractical and potentially hazardous. It is but one example of how renovation plans need to be informed by the concerns and needs of the residents. The researchers convinced estate managers and designers that visiting the individual apartments and talking to the residents is crucial to getting a full understanding of the condition of the building. 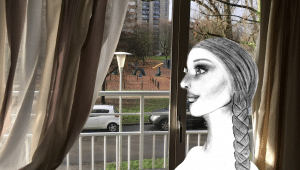 The project also worked on creating positive images and stories about social housing estates. This was not an easy task as many people typically hold negative perceptions of social housing. In the Brussels case (three months into SohoLab’s research) some small riots took place on the estate. This turned into a press event, where images of rowdy teenagers attacking a cameraman were broadcast in the wider Belgian media. Not only did this portrayal lack nuance, but it only depicted a very narrow segment of the lived reality of the housing estate. The experience of elderly inhabitants suffering from poor health, young teenagers, or mothers with young children who are also very present in the neighborhood is totally absent in this media image. This spurred the Brussels team into creating a digital storytelling project.

Michael emphasises that this wasn’t just a case of researchers posing questions to residents. Instead, the researchers held conversations with the local residents, letting the narrative focus go wherever the residents wanted it to go. The aim of generating this type of content is to disclose this information for planners and policy makers whose views of the neighborhood are also framed by the one-sided press coverage.

The project also worked on other forms of communication. For example, they identified the need for a system of coordination for social housing. This was necessary as there were sometimes four or five different organisations working on separate programmes in the exact same estate without any of them talking to each other. Michael again emphasises how this was easy to see on the ground, whereas this would have been impossible to notice if they had conducted their research remotely.

There is more to social housing than meets the eye

In the end, Michael thinks the project disproved the notion that residents in social housing estates don’t care about their homes. Rather, the indicators we tend to use, such as manicured green spaces, aren’t necessarily the right ones. He offers an example, “people on the Brussels estate appreciated having biodiverse and green areas, they just don’t measure it in terms of neat hedges and well-mowed lawns.” So, using these as indicators of appropriation makes little sense.

Another finding which isn’t immediately obvious is that social housing estates aren’t just residential spaces. In the Paris case, they found that some local women were working in childcare, and some mechanics were using the estate’s car parks as workspaces. If planners were equipped with this understanding, they could see that improving the quality of playgrounds and street parking would have beneficial knock-on effects for the local economy.

Michael reaffirms his belief that SohoLab’s research shows just how important it is to conduct research experiments in real-life that take place on the ground. He thinks doing this creates critical feedback loops between local residents and decision-makers. He demonstrates this through a final story about the Milan case, where the pilot project ‘Green Living Lab’ was developed. In the project, very minimal interventions were done, like coloring the sidewalk and putting in new outdoor furniture. The idea was to literally bring public attention to the condition of the public space while encouraging new forms of cooperation between citizens, local institutions, inhabitants, and organizations. The project got the ball rolling on a collaborative agreement with the municipality of Milan, aimed at stimulating cooperation between institutions and citizens in the management of shared spaces. Nevertheless, Michael is quick to add you can’t only rely on transferrable methodologies. He finishes the discussion by saying, “the most important thing to remember is that you have to understand the local context and engage with the local residents and really hear what they are saying.”