This year’s EU-China Forum on Urban Scientific Research (17 May, Tianjin, PRC) focussed on exchanging and highlighting of current urban development in China and the requirements for sustainable and livable urbanization in the future. JPI Urban Europe was invited by the China Center for Urban Development (CCUD) to co-host the event which took place on 17 May in the City of Tianjin. The outcomes of the conference will inform JPI Urban Europe’s future activities with its Chinese Partners, as well as the joint EU-China roadmap, which is currently developed by the European Commission.
By Johannes Riegler
Published: 25 June 2019
Share this article:
facebook   |   Twitter   |   LinkedIn

During the plenary session of the conference Lie Tie, Chairman and Chief Economist of CCUD, underlined the relevance of smart city approaches for the current and future urban development in China. However, Mr. Lie stressed that these approaches need to address urban challenges identified by the local governments, a process, which he described as being necessary, yet hard to conduct. Further, Mr. Lie underlined that developments in smart cities are not only about new technologies but require a rethinking of existing governance procedures. His statements underlined how relevant capacity building and transdisciplinary work between city administration, research/innovation and business is to jointly work towards sustainable and livable urbanization in China.

In her presentation Margit Noll, Chair of JPI Urban Europe’s Management Board, focused on introducing JPI Urban Europe’s dilemma approach as described in the SRIA 2.0 and highlighting consequences for Chinese urban development. Furthermore, Margit presented the JPI Urban Europe funded projects Smart Urban Isle, PARENT and SmartCityHospitality and underlined how important experimenting (in urban living labs) for sustainable urbanization is by introducing the guidelines developed by the SmarterLabs project. The following panel discussion showed that besides smart technologies, processes and capacity building of organisations and individuals involved in urban development is required to address urban challenges in China.

Chinas has seen rapid urbanisation over the last decades. At the same time, policy and decision makers in China paid increasing attention to the negative implications of the trend. Strategies and approaches have been implemented which address the negative impacts caused by the rapid urbanisation such as environmental protection and sustainable development. In 2013, the concept for the New Type of Urbanisation Model was adopted. This model focusses, among other issues, on the transformation towards a more sustainable way of developing the urbanisation process.

CCUD and JPI Urban Europe wanted to exchange knowledge and approaches from EU and China to address the urban transformations in the co-hosted session “the Future of Smart City Developments in Europe and China.” The session was chaired by Margit Noll (JPI UE) and co-chaired by Qiu Aijun (Deputy Director General, CCUD). Martin De Jong (University Delft) opened the session by highlighting how different urban transition pathways use various notions (such as smart, eco, creative, etc.). Martin de Jong also highlighted how the different notions connect to sustainable urbanization as well as to city branding strategies.

In the following session, presenters from China and Europe presented their work on the theme and highlighted what, from their opinion, is required to support balanced sustainable transformation of urban areas with contribution of smart city technologies. Zheng Mingmei (Director  General of Smart City Department of CCUD) stated how Chinese urbanization, among others, today focus on high quality developments and people centered approaches. Mao Mingrui (CEO of Urbanxyz) underlined the need for softer approaches and presented the potential of virtual reality for participatory designing of public spaces. The requirement that applying new technologies in urban areas should ultimately lead to an increase of livability and the need for sustainable finance models was pointed out by Christoph Nedopil Wang (Director of International Cooperation Department of CUFE). Liu Daizong (Program Director of China Sustainable Cities) focused his presentation on the role of urban mobility for the future of Chinese cities. Marie Harder (University of Brighton, JPI Urban Europe/NSFC funded RECREATE project) concluded the series of presentations by stressing how important shared values are for sustainable urban transitions and how the WeValue method can help distilling these values among diverse stakeholder groups. Gianluca Ghiara presented the perspective of the EC-Link project. The combined contributions by the speakers illustrated a diverse set of focus areas in the smart city and sustainable city debate, yet, they illustrated how important an integrated approach is and how applying technology can be understood as a means towards sustainability rather than a goal in itself. 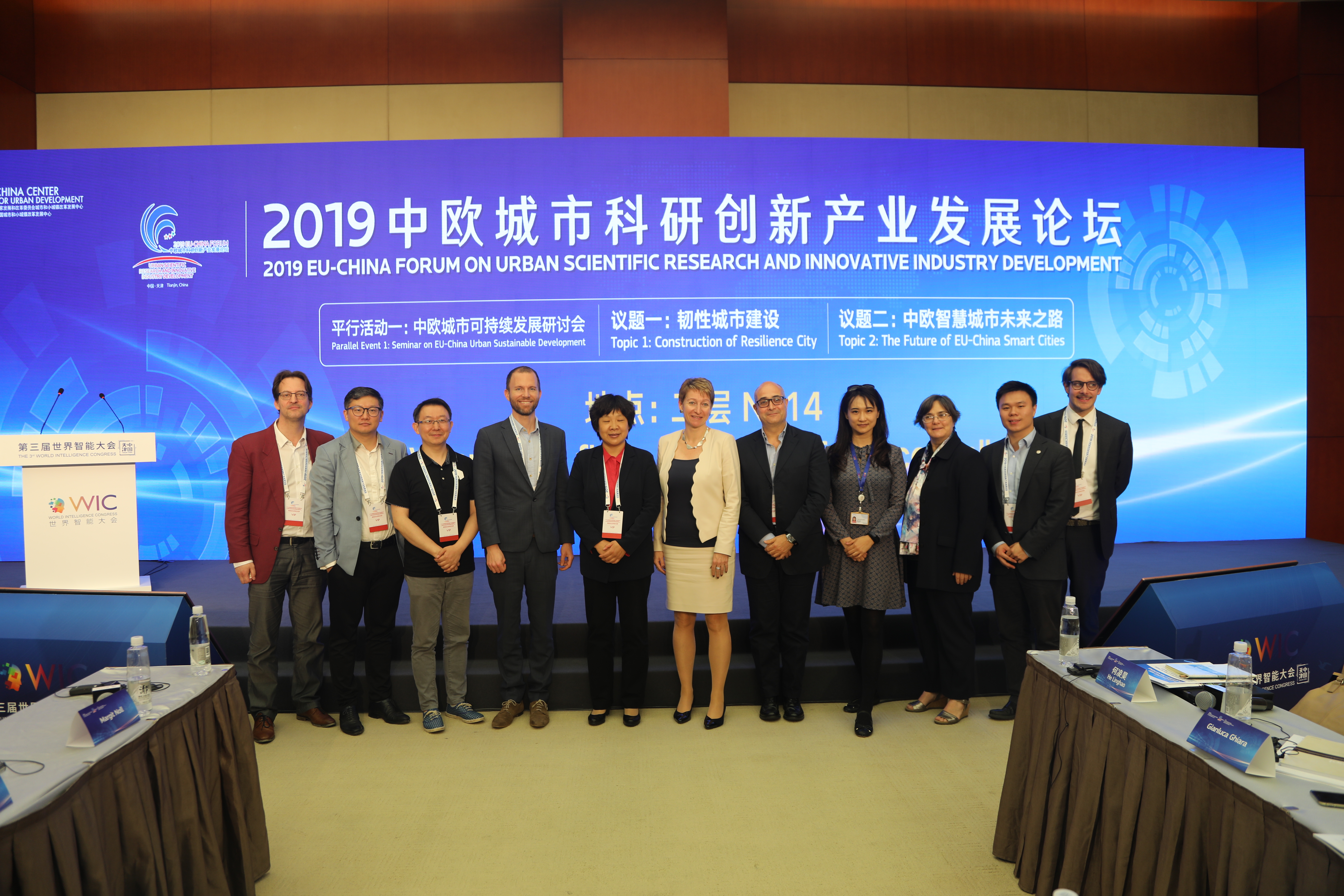 The results of the session brought important insights for JPI Urban Europe’s engagement in China and the future work with the Chinese partners. In China, the gravity of the large metropolitan areas attracts vast numbers of investments, knowledge and people. In this light, smaller urban areas require increased attention. ICT offers amazing options to inform governments to take decisions and let people participate. However, one key message showed that green financing to support sustainable urbanization is of essence to make big leaps forward. Finally yet importantly, standards, particularly in the building sector were mentioned as a current field for action to create the common basis for sustainable development.

JPI Urban Europe and the China Center for Urban Development (CCUD) are exchanging since 2013 which lead to a Memorandum of Understanding which was signed in 2017. For JPI Urban Europe, CCUD is an important partner to share knowledge and good practices on sustainable urbanization from Europe and China. This cooperation led to a joint publication, which was published in May 2019: Sustainable Urban Development: Challenges and Good Practices in Europe and China.