The Urban Future Global Conference has established itself as one of the major European conferences on urban matters over the last years where policy makers, researchers/innovators, city and national officials, and everyone else who consider themselves as city changers meet. This year’s Austrian Smart City days were imbedded into the programme or the Urban Future conference. JPI Urban Europe contributed two sessions which aimed at connecting global policies and visions and local research/innovation activities.

“SDG11 and the New Urban Agenda: Consequences for Austria and the role of technology” was the title of the first session. Jeanette Elsworth, Head of Media of UN- Habitat in Nairobi, introduced the work of UN-Habitat and highlighted the relevance of the 2030 Agenda for Sustainable Development and its Sustainable Development Goals and New Urban Agenda.
“Although SDG11 is entirely dedicated to sustainable cities and communities, we see that cities have tremendeous relevance on fulfilling targets and ambitions set out in other SDGs.” says Elsworth. 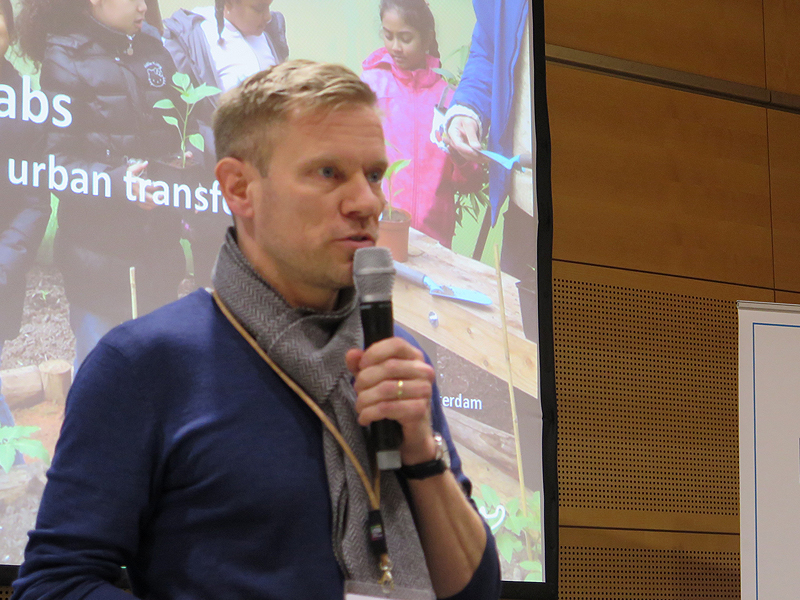 Additionally, Petra Oberrauner, vice-mayor of the City of Villach, provided insights on how a medium sized city in Austria is translating global policies into concrete local actions. Oberrauner pointed out that for Villach it is essential to use technologies in connection with enhances participation processes to increase the quality of life. Wolfgang Amann, Institute for Real Estate Construction and Housing, took the initiative to reflect on the specific situation and requirements of Austrian cities in connection to the New Urban Agenda.

Figure 1: The audience had the possibility to contribute to the session by using online voting on their phones

Linking global policies and ambitions with local implementation is essential to reach the SDGs and implement the New Urban Agenda. Urban Living Labs can be one potential method to translate these ambitions into the local contexts. In this sense, JPI Urban Europe together with the Austrian Ministry of Transport, Innovation and Technology organised a session on this experimental method in the Urban Futures Conference.
In front of a full house, Timo von Wirth, DRIFT; Erasmus University Rotterdam, introduced the Urban Living Lab. Timo presented the key messages of the JPI Urban Europe funded GUST (Governance of Urban Sustainability Transitions) project. Urban Living Labs can change the way how we think of urban planning and development.

Urban living labs are arenas for innovation and transformation while providing test grounds in a real-world environment. They can play an essential role in developing new urban solutions. They are a place and mode for experiments for multiple stakeholders and on suitable scales. Following Timo’s keynote, the 40 participants had the chance to learn more about six implemented Urban Living Labs in Austria, among others Thomas Drage (City of Graz; URB@EXP and SmarterLabs); Alexandra Janze and Markus Messics (City of Leoben; URB@EXP) presented their experiences with Urban Living Labs in JPI Urban Europe projects.

The sessions (co-)hosted in the Austrian Smart City Days / Urban Future conference 2018 highlighted the need to translate global urban policies such as Sustainable Development Goals and UN-Habitat’s New Urban Agenda into local contexts and gave the floor to participants working on different geographical scales: from very local, to European to global. We saw that research and innovation projects can contribute to this translation and the contextualisation especially by applying experimental methods such as Urban Living Labs.