We recently interviewed Peter Dalsgaard about the PLACED project, which is creating a prototype for digital capture tools for workshops and public events that take place in libraries. Wanting to offer a deeper understanding of the project, we also spoke to Sidsel-Bech Petersen, Head of Innovation and User Involvement at Aarhus Public Libraries, to talk about user experience. Sidsel and her library team worked closely with the researchers from PLACED. She tells us all about PLACED from the perspective of the library staff… 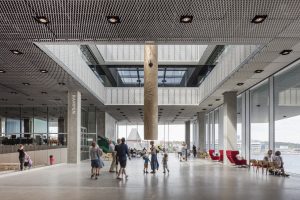 Libraries of the future

Unlike in times gone by, most information is usually just a click away. So, what’s the point of having all that library space in the middle of our cities? Many libraries aren’t even that nice to be in. When people close their eyes and think of a local library, they see oppressive wooden rooms, eerie silence, spooky dim lighting, and dusty unread books. Worse still, some just think of a boarded-up old building, a sad relic from the past.

Imagine this instead: you look up at a building that looks like a futuristic spaceship. When you walk in, you find a cavernous atrium, bathed in natural light. The windows are so large, they’re basically the walls and ceilings. The first thing your eyes focus on is some energetic children running around a statue of a rhino. For a split second, you wonder if you’ve accidentally walked into a modern art museum, but then you notice the sleek back-lit shelves full of books. As your awareness grows, you realise you’re in a practically wall-less landscape full of people reading and working. It’s somehow lively and peaceful at the same time.

In reality, you don’t really have to imagine this place, you could just go there. It’s called Dokk 1, and it’s the main public library in Aarhus. Why is Dokk 1 full of people whilst other libraries go empty and unused? The answer lies in the vision behind its creation. In Aarhus, they see the library as a democratic space, where people come together to share and create knowledge. So, the library was designed to be both inviting and capable of facilitating lots of public events. So far, this vision has been a roaring success. All of Aarhus’s eighteen branch locations are in a healthy condition, and they haven’t had a library closure in decades. Sidsel tells me that the vision behind this success isn’t complete yet. Even though they’ve cracked the formula for inviting people in and holding lots of public events and workshops, when it’s all over most of the knowledge generated in these workshops walks out the door. PLACED offered the library an exciting opportunity to change this. 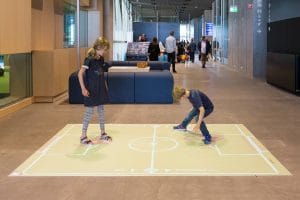 Many libraries are worried about experiments like PLACED going wrong and losing their funding, but in Aarhus, they’ve found that the opposite tends to be true. Even when an experimental fails, “it’s an opportunity to learn from mistakes.” Sidsel thinks their approach has actually helped them get more funding not less. Instead of getting hung up on the short term successes and failures of a project, in Aarhus they focus much more on the long term perspective. Of course, this is easier said than done considering the library staff has to organise over a hundred and fifty events every month, which means they have limited time to reflect on long-term considerations. This is where the academic team from PLACED came in to offer the support the library staff needed to develop their long-term perspective.

Some of the library staff weren’t immediately sold on the PLACED project. Initially, many of Sidsel’s colleagues couldn’t see the benefit of recording the library’s workshops and events. The library staff told the academic team, “even if this capture system works, how do we get people to participate and use it?” Without an answer to this big picture question, the technical details wouldn’t matter. Thankfully, a PLACED researcher called Daisy Yoo was able to provide them with a decent answer.

Keeping an eye on the big picture

Daisy had a lot of experience working with librarians and archivists, so she was able to engage them in a familiar way when joined the project research team. Additionally, her expertise in interaction and design also helped her understand what the librarians and service users needed. Her approach and the staffs’ open-mindedness managed to turn an initial feeling of scepticism into enthusiasm. In particular, Daisy developed an excellent working relationship with Marie Pasgaard Ravn, the head of the library’s creativity workshops. These are interactive arts and crafts workshops for children held on a weekly basis. Daisy and Marie agreed these workshops would be the perfect test cases for the project.

Marie could instantly see even an imperfect digital capture system would offer great value for the children. If a child missed a session, they wouldn’t lose out because they could see what had happened in that session. Even if all the children had participated in the session, lots of them would still benefit from checking what they had learnt again. For example, if a child forgets a step in making a musical instrument, instead of feeling defeated, they could revise what they did in the workshop if they were having difficulty overcoming a particularly tricky step. Marie offered the project vital insights about how the children and their parents would react to the recording equipment and the system’s software. Daisy carefully took all of this input in mind and made a prototype that everyone was comfortable using and felt added to their experience in the library.

Eyes to the future

Although the project’s system is only a prototype, Sidsel is really positive about what it represents:

“We’ve never seen anything like this before in the library field.” – Sidsel

For her, it’s proof that not only can you generate new knowledge in the library but you can also capture it. Of course, as they go forward with the prototype, they’ll have to think about all sorts of things like GDPR compliance, creating user guides for staff, and proper integration with the libraries’ existing systems. This doesn’t worry Sidsel as she reminds us that in Aarhus they’ve had a long history with experiments. Every success and failure helps achieve their long term vision for Aarhus Public Libraries: making the library a public space for knowledge creation. For Sidsel, this project was one more step in the right direction.