Cities are becoming ever more complex, whether it’s in respect to transport, energy or administration. Dealing with this ever-increasing complexity, many policy makers are turning to the smart cities model. This model involves the heavy use of technology and data to improve urban systems. However, projects like Smart Urban Intermediaries argue it’s just as important to look at the human side of things. Merlijn van Hulst and Oliver Escobar, two of the project’s researchers, want to explain why their work shows you can’t have smart growth without a human touch… 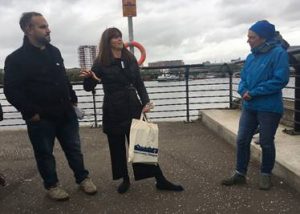 The people that make change happen

Both Merlijn and Oliver talk animatedly about how there has been far too much emphasis on smart technology and not enough on smart people. Oliver points out by the year 2025, “we will have spent over $265 billion on the smart cities model.” Yet, in many cases, like in Tokyo and Toronto, all that seems to have happened is that large technology firms have literally taken over entire neighbourhoods with little obvious benefit to local citizens. Neither of them are dismissing the role of technology, but they both think what really makes a difference to a local area are the people they call smart urban intermediaries.

Smart urban intermediaries (SUI) are “relationship brokers.” They know who needs to know who else to make change happen and how to put them in a room together in a constructive way. SUI aren’t necessarily defined by their job titles as they could formally work in different fields. However:

“What they all have in common is the thing that makes them smart:
social skills, an understanding of multiple fields, and their knowledge of their local neighbourhood.”

For example, someone working as a community development officer would have a clear understanding of social exclusion, poverty, refugees, and how local amenities work. Both Merlijn and Oliver argue that if you can’t get the right people together in the first place, you won’t even know what to do with new technology. So, to make that happen SUI need to be able to do their jobs well. This project was all about finding out what they require, conducting over one hundred interviews with forty SUI in four cities (Glasgow, Amsterdam, Copenhagen and Birmingham), shadowing them in course of the work and bringing them together locally and in transnational events. Merlijn wants to be clear, they weren’t studying the urban problems, they were studying the people who fixed them.

Going into their findings, two particularly interesting points stood out. The first is that SUI are very focused on community-making. To do that they usually start on an individual level, building up their capacities and require few resources. Yet, when taking the bigger step of creating a community, they need the right kind of urban space. Merlijn calls this placemaking. This project has shown that communities are rooted in physical spaces within a neighbourhood and these spaces are essential for building coalitions of change. So, the project is generating a report which shows how, why and where these spaces should be created.

The second interesting finding was that SUI build networks, but can also grow through networking. Oliver explains that they brought together SUI from their four case study cities to their transnational labs, international meeting spaces where everyone could share and learn from each other. The SUI really loved this as they were keen on learning things that worked elsewhere and seeing if it could be applied in their context.

“Merlijn and Oliver hope that they’ve set the foundation for a long-term transnational network between the SUI in these four cities and others involved.”

They are only human after all

Before, getting carried away with why SUI are so great, Merlijn wants to make sure we understand that we’re still talking about humans. If we place too much on their shoulders, it can seriously affect their wellbeing and ability to work. The SUI analysed in this project were extremely hard working and had built their capabilities through years of dedication.

Merlijn notes “these qualities have led some of these people to burning out because they tend not to give up and what they do is not easy.” So, the project has also generated recommendations for SUI themselves, emphasising the importance of looking after themselves so they can carry on doing what they do for a longer time.

All that glitters is not gold

The project has also found out that governments and NGOs have to change some practises to support SUI. Specifically, they shouldn’t overlook the core activities which SUIs do in favour of technological solutions as “ they are in need of funding as much as the shiny new solutions.”

Another risk is putting everything in the “language of innovation.” This sometimes forces SUI to waste precious time using new language to refer to effective long-standing practises just  to “keep funding for things they are already doing.” The project’s recommendations in this respect are all about being mindful of how funding schemes impact and influence the work of SUI.

In the end, both Merlijn and Oliver think this project has shown how important SUI are and how they need to be supported. Merlijn hopes that in the future politicians will “allow the risk for uncertainty” as SUI won’t always be able to see in advance of building a specific coalition and what kind of performance indicators make sense. So:

“You have to trust people to know what they are doing as much as we trust technology.”