Every good urban policy needs an authentic story, the cultural sector knows how to forge them. 3S RECIPE is a cross-European research project working with ‘smart shrinkage solutions’: urban resilience strategies for cities facing depopulation. The project recommends that local governments work more closely with their cultural sectors when developing urban resilience strategies. If we want to understand why they should do this, we have to see it from an artist’s perspective. Susan Clarke, creative director at B Arts, explains how their organisation creates work that fosters community building in North Staffordshire. 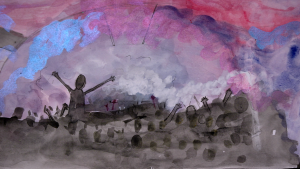 Susan is keen to dispel the idea that artists are solitary, introverted creatures, monastically dedicated to representing the world from afar. This is just one stereotype, and in reality, some artists want to do more than just represent the world. The artists at B Arts are all interested in shaping the world around them. They work in and around the city of Stoke-on-Trent on projects focused on community building. Even though B Arts is a collective of different artists with different styles, they all explicitly work with locals who “don’t consider themselves to be artists.”

The collective is animated by a shared belief that when artists work with ordinary people, they break down barriers through communication. When explaining how this works in practice, Susan recalls a project where B Arts brought some teenagers and elderly citizens together to create a piece of art in a local playground. Before this, the elderly citizens had viewed the teenagers as trouble, whilst the teenagers felt like they had little in common with the senior citizens. However, after they worked on the project together, both groups had a more compassionate perspective of each other.

The power to transform spaces into places

3S Recipe’s researchers saw the way artists brought people together and how this could be used to combat urban decay. In particular, they drew a lot of insight from a B Arts project called Artcity. This project focused on what Susan calls “the pirate’s smile” of urban regeneration, a visual analogy for the way regeneration has shaped the landscape in Stoke-on-Trent. When you look around the city, you notice nice new housing estates, but you also notice large spaces in between these estates full of dilapidated ex-factory buildings, closed down libraries, and out of use swimming pools. Looking around, you see a bleak picture of industrial decay and harsh funding cuts. Artcity was about taking these spaces and transforming them into vibrant new art spaces, which in turn would create a more hopeful narrative.

Using funds from the Esmee Fairbairn Foundation, the Artcity project took over ex-industrial sites and got artists to create work with and for the local community. This has transformed spaces that people used to associate with stories of a better past and turned them into welcoming places to talk about the future. Projects like this make the city a more attractive place to stay for artists, the local community, and even university students who’ve come from elsewhere. The 3S RECIPE team saw how the arts sectors could play a tremendous role in fostering urban resilience, but also noticed that local authorities weren’t fully embracing the cultural sector.

Harnessing the power of art

In explaining why this is the case, Susan paints a complex picture. She thinks it’s unfair to simply say the local government is resistant to working with artists. Although, in the Artcity case it was difficult in the beginning to get the local authority to pay attention, by the end of the project they had become extremely supportive of what B Arts were doing. Susan attributes this in part to the dialogue structure set up by the 3S Recipe researchers. The local authority even led a bid, in partnership with the cultural sector, for Stoke-on-Trent to become UK City of Culture 2021. Since then they have retreated even further from direct investment in the cultural sector.

Even though she understands where the local authority is coming from, she thinks they could really benefit from embracing a role in the arts, even if it’s a smaller one. As the capacity of the state recedes, projects like Artcity will require more partners in new places, such as Local Education Partnerships (LEPS). Susan thinks that instead of focusing on how this might make projects riskier, the local authority should see how this will make “the outcomes even richer.” She reasons more partners, means more perspectives. So, the local authority could still benefit from future projects like Artcity. She is convinced there is a lot of potential for growth in the cultural sector.

Art can be a language of understanding

Explaining why she’s so confident about the capacity of the cultural sector, Susan brings the conversation back to communication. She believes artists can get people to talk in a way city managers can’t. Specifically, artists can get people to be honest about their feelings. Since artists are always engaging in new forms of communication, they end up doing a lot of listening. In Stoke-on-Trent, artists have noted how local people feel that policymakers aren’t doing projects that are “for them.” An example of this is the policy focus on promoting theatre over music. Susan is confident, from what she’s heard, that if the city’s policy makers created a large concert venue, “people, locally, would really love that.”

In the end, Susan thinks a lot of the city’s policy problems stem from an attempt to ape the narratives of big cities. Mass transit systems and bus services might be effective in cities like Manchester and London, but in Stoke-on-Trent “people don’t think taking the bus is a great option and would rather get an Uber.” So, instead of taking narratives from bigger cities, smaller cities like Stoke-on-Trent have to create their own stories. From Susan’s perspective, art is all about creating narratives, which means any engagement with the cultural sector is essential for policies rooted in local stories.